I was fortunate to receive an ARC copy of Nevernight by Jay Kristoff in exchange for an honest review after both the description (and the cover) caught my eye. 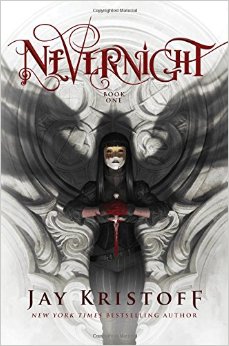 In a land under three suns that almost never set (Nevernight, get it? But it does get dark every 2 ½ years), Mia Corvere witnesses the execution of her father as a traitor after a failed rebellion, the arrest of her mother and baby brother, and barely escapes with her life, all at the age of ten.

As Mia makes her way through the world over the next six years with assistance of a retired killer named Mercurio, and the shadows that are drawn to her and drink her fear, she’s left with her mother’s words, “Never flinch. Never fear. Never forget.” This is the anthem she lives by and repeats to herself as she prepares to enter the Red Church to become an acolyte in a school of assassins wishing to pledge themselves to and to be accepted by the Lady of Blessed Murder; all to get back at those responsible for annihilating her family (Scaeva, Remus, and Duomo).

The first thing to note is that this book is violent, there’s plenty of blood, swearing, death, and even some sex, so it’s not for everyone. The interesting thing is how the prologue warns of you this from the start, including:

“And if the unpleasant realities of bloodshed turn your insides to water, be advised now that the pages in your hands speak of a girl who was to murder as maestros are to music. Who did to happy ever afters what a sawblade does to skin.”

Heavy prose and metaphor may not be more your thing, and if any part of the above lines irks you, I suggest you pass on reading Nevernight. However, if any part reels you in, it’s worth the read. I admit that I was swept up in the way it was written and for the most part, increasingly interested in learning more of the story.

Mia, with the help of Mister Kindly, the “not cat” made of shadows that becomes Mia’s companion, navigates the world around her on the way to the Red Church; though not always helpful, his banter with Mia as he drinks her fear entertains the reader as it allows Mia to act without flinching, moving fearlessly.

On her way to the Red Church (which involves collecting the tithe of some teeth or bone of someone you’ve killed), Mia meets a half Dweymeri boy named Tric (which we learn is not a proper Dweymeri name, nor are his facial tattoos the proper artist style, nor his brown skin dark enough, nor tall enough; we learn why this matters in relation to his reasons in joining the Red Church later). Together, Mia and Tric travel across the unforgiving desert, outrun a sand kraken, fight with and then save a woman named Naev, all on their way to deliver their tithes and become acolytes.

Tric, Mia, and a group of other young hopefuls pledge themselves to the Red Church in hopes of taking one of the four open spots for assassins. The rest (that live) are to become Hands (helpers, servants, etc, which is what Naev is), and stay on to assist the Church and inhabitants in anyway necessary.

Along the way, Mia meets other students, a couple that she is friendly with such as Ashlinn (called Ash) or Carlotta (called Lottie), and one in particular that is not so friendly and has in fact sworn to kill Mia,  named Jessamine. Jessamine’s father was executed beside Mia’s father as a traitor due to the failed rebellion. Such hostility is tolerated in church of thieves and assassins, as long as no one openly defies any rules set by the Shahiid’s (teachers/Masters), or the heads of the church, including Lord Cassius (rarely seen), and Mother Drusilla.

Classes include instruction in thievery, poisons and potions, seduction and extraction of secrets, as well as fighting techniques and sparring practice (which often turns violent and bloody); each of the Masters issues a challenge in their field, winning one or more of the challenges garners the favor of the Master and a near guarantee of being one of the chosen four to become pledged.

There is plenty of intrigue and animosity (and hormones) at play to keep the novel moving. More mystery is added when it’s learned that enigmatic Lord Cassius happens to also be darkin, or those that converse with the shadows and the dark, and it’s not just anyone that can call the shadows to them; in fact, most people are petrified of the darkin. This stokes Mia’s desire to learn more about what it means to be darkin, which prompts her to visit the worm infested library of dead and forgotten books in search of the right one to assist her (the keeper of the books tells her he’ll keep an eye out for one).

One thing she learns the hard way about being darkin is the vulnerability to the sign of the Trinity, three suns to represent the god Aa; she becomes violently ill and tries to hide from it, attempting to retreat into the shadows. The Trinity also prompts Mister Kindly to leave Mia for the first time ever since he first came to her in attempt to flee the symbol of the blessed suns.

I took a special liking to Mister Kindly. Something about the darkness and Mister Kindly in general kept me coming back to drink up more of the story (though I did occasionally need to put it down and step away because some of the characters’ decisions or thoughts were irksome). Perhaps it’s the visual aspect that draws me in. I foresee many a piece of fan art to be made from this book. It speaks to a lot of my own inspirations and reminds me of some of my own ideas; something about the shadows and Mister Kindly makes me want to create things.

All around I have to say that I enjoyed reading Nevernight and am curious what happens in the next couple of novels and leads to Mia’s death, which the narrator tells us of at the very beginning. Which leads me to the first of a couple of things I was disenchanted with, downright disliked, or seriously question.

Our narrator is never named, but tells us early on, not only of Mia’s death, but that the narrator loves her. Sometimes the realization that our narrator knows all that they do about Mia makes it a little creepy, or at the very least poses some questions on the part of the narrator. By the end of the novel, there’s no way to know if we’ve met the narrator yet, or even if the narrator can be completely trusted, which again poses some interesting queries.

Perhaps it’s because of the narrator (whoever they may be) is telling the story, but there are a lot of footnotes. Some of the footnotes are useful and helpful to the reader, such as the ones that give more context or information to something typical in the book, such as copper and iron coins being called “beggars” and “priests” respectively as slang, and gold ones just called gold. However, I found some of them unnecessary tangents that could be distracting by sometimes taking up half the page, and often continuing from one page to the next, all without actually adding to the story; I wonder if all of them will be included in the final version.

One thing that kept bothering me while I was reading involved that of a woman named Marielle, who lives in the depths of the Red Church with her beloved brother. Marielle is visibly deformed, described as sadistic and grotesque; the visual malformation is the price of the gift Marielle wields, which allows her to change features, alter flesh (Marielle is the one that doles out punishment by ripping up the offender’s back with her gift).

So here is my issue: only four acolytes are chosen to stay in the Red Church as assassins, and there are roughly thirty to start. Even though the numbers are paired down, I question why Marielle is bothered to transform the features of all living acolytes that have not yet been chosen and accepted into the Church in a capacity that would necessarily need their features changed…maybe that’s just me though.

Besides a stray couple of continuity issues, including Mia throwing her “last throwing-knife” more than once in the same fight a few pages apart and a duplicate description of a character chapters apart, the only other issue within the novel that I have concerns the number of soldiers/legionnaires involved in the big fight near the end. It reads like a never ending parade of faceless soldiers that are only there to impress the reader with their numbers to drive the drama. It falls flat to me and just reminds me of bad fight scenes in movies. Admittedly there’s a lot going on in the midst of battle and fights, but it felt like every few paragraphs there were yet another 20-100 soldiers at any given time, none of which adds up if you tried to do the supposed math. So, not my favorite aspect.

Lastly, I raise the question of the age range on this book; I absolutely do not believe it belongs in Adult Fantasy. There are some “adult” themes, but as a whole, it reads more YA than Adult. The main character is 16 years old, and most of the other acolytes are around the same age. Then there’s the general maturity level of the characters, their thought processes, logic, and the decisions they make, all of which strongly give me the impression of more Young Adult than Adult in nature. I read somewhere that the author described it as possibly NA, or New Adult, and that I would concede as well, but not Adult. (This was also an interesting read that further adds to my feeling this way.)

Measured in that regard, I enjoyed it enough to be curious about the next books, but definitely not for an adult reader looking for a Fantasy along the lines of Song of Ice and Fire, Wise Man’s Fear, etc.

Nevernight is dark. If you are one to be swept up in language, it will devour you. I would recommend it to Fantasy lovers, those not adverse to violence, if you’re looking for something a little ominous that will entertain you (but not really challenge or change you), then you’re in the right place. I look forward to hearing more about the second book in the future.