If you follow me on Twitter or Facebook, or are familiar with my blog, then you might have heard me mention 2Cellos a time or two. More often than not it’s me sharing a song that’s inspiring me, creating fantastic images in my mind that I have to write down; sometimes I just love watching them play and then fuel that same passion and love they have of playing their music, into my own writing.

When I was writing my novel for NaNoWriMo, there were many pages hastily written after listening or watching Luka and Stjepan play over and over again. In the midst of my frantic search for more of their work and information on them because I was curious (they’re from Croatia, which endeared them to me all the more; a friend of mine that died a few years ago was also from Croatia), I found that they were playing at The Fox Theatre in Atlanta in February, on the 9th.

I had little hope of being able to go, The Fox not generally being in my price range, but I had vague hopes and intended to try. To my surprise, my mother, at the persistence of my sister (thank you both!), gave me a wonderful Christmas present: Two tickets to see 2Cellos when they came to The Fox!! 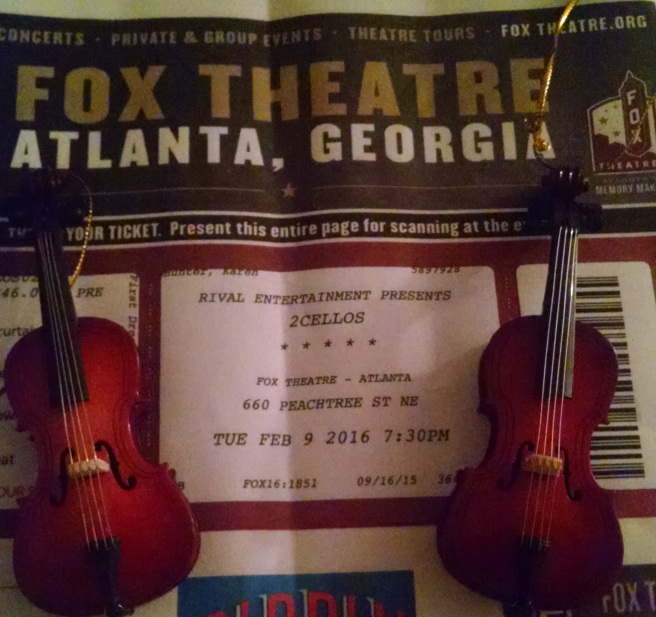 So last week, an old friend of mine joined me, and we went to see 2Cellos at The Fox!! I have never been to The Fox, despite having lived in and around Atlanta most of my life. The entire night was an experience (especially for this homebody introvert.)

So how was it?

At the end of the night, I absolutely enjoyed myself, which was in great part due to my friend, Grim, who took the anxiety of driving in the damned city and need to budget the energy for it out of the equation for the night, which was wonderful and helped a lot.

We arrived, in the freezing cold with wind quite capable of blowing me off course mid-step (no exaggeration), at The Fox, a solid 45 minutes before show time because you never know what Atlanta traffic will do…and parking…parking can be a nightmare. We were able to park across the street from the theatre, which was infinitely grateful for, and we arrived.

We bustled through the doors amidst the throng of other freezing people vying to get in. We each had our tickets ready, following the crowd through this large hall until meeting another set of doors. Through here was the carpeted theatre lobby, at the foot of the large staircase that would lead us up to our seats.

We went straight to our seats and had this fantastic view while we waited:

We were there early, so we spent some time taking pictures of the theater around us from our seats. 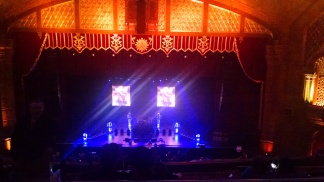 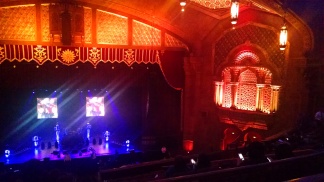 We were there early, the show started 15 minutes late, and the theatre slowly became packed with people. It was interesting to hear snatches of conversation, see people who recognize each other from seats across the aisles; I was enjoyed some people watching while we waited, what author doesn’t?

By 7:45, the lights dimmed, and Luka and Stjpan took the stage with confidence seen in people following their dreams. Their smiles lit up the theatre, the bright lights were unnecessary. They greeted the audience and regaled us with the last time they played at The Fox, it was opening for Elton John. After saying that they’d made it back to the same stage on their own, they claim that Elton John will be opening for them next time they return 😉 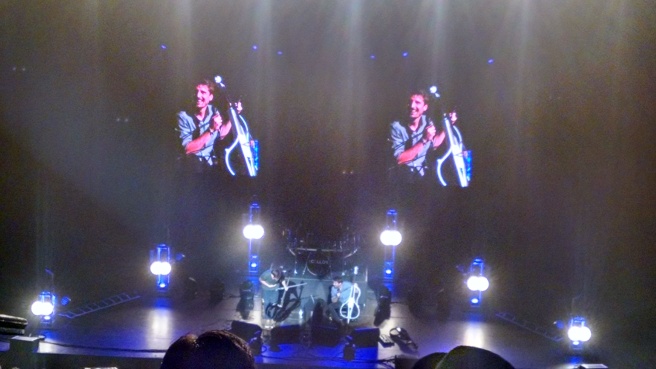 It was a joy getting to see some part of their personalities; they had a fun sense of humor, but more than that, there was the love of their music, which was intoxicating and uplifting. Soon after their greeting, the fingers were flying at the strings and they warmed up with a little classical, showing off their years of skill and technique.

Things didn’t take long to heat up, Luka and Stjepan’s bows shredding as they played; I cannot begin to describe the awe and appreciation I have for such skill and talent and such love and enjoyment of music as shown by 2Cellos. 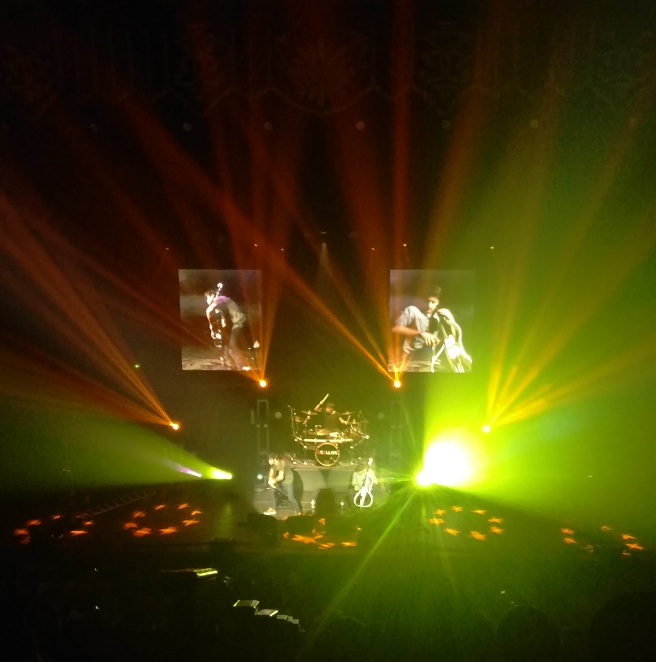 In between some of the songs, Stjepan or Luka would take the mic and speak to the crowd. Often time it was to make the crowd laugh. Stjepan, in his dramatic and rugged way repeatedly mentioned how “beaut-i-ful” the music was, and as the flirt he is, dedicated the beautiful music to the beautiful ladies in the audience.

It was so easy to melt away in my chair listening to them play. I wished I could have done more actual watching them play, but unfortunately, the lights continued to arc right into my eyes, particularly during the fast paced songs where I pretty much kept my eyes closed instead of accidentally meeting with the brutal flares.

We didn’t stay for the entire concert, an accumulation of reasons equating to the final decisions to leave sooner than the end. A booming and sensational rendition of Thunderstruck, which included adding a drummer and some pretty serious sounding bass, heralded a switch in music style. The drummer stayed, and between the bass making my heart feel it would explode within my chest cavity, a headache beginning from the unfortunate and continued glare of lights in my eyes, and a general escalation of energy, my skin was practically sizzling and I was very much ready to be in a more reclined and relaxed position, as much as I was reveling in the music of Luka and Stjepan as they played live.

We did manage to snag this picture before heading out

I enjoyed hearing songs I knew, and ones I had not heard before; truly it was a fantastic experience I was not sure I would have. I cannot say enough how thankful I am to my sister for championing this desire of mine, my mother for this heartfelt gift, to Grim for joining me, and for two sensational musicians to while the night away with.

Is there a concert or show you have attended that you were particularly excited to see? Or one you’re looking forward to? Tell me about your experience!

You Might Also Like:
Amazing Writing Community Benefits and Why You Need Yours
10 Sensational Books Worth Your Time

4 thoughts on “My Amazing Night at The Fox: 2Cellos”